Leslie, Kristi and I hosted our second baby shower in the past three weeks, with one more to go in March.  This shower was for baby Zade, Scott’s sister Celia’s grandson.

Leslie chose a Georgia Bulldog/tailgate party theme, so the day was overtaken with red and black.

Here are some pics of the setup and the guests. 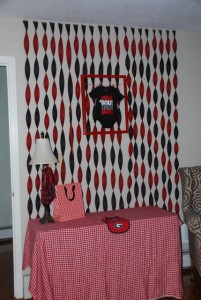 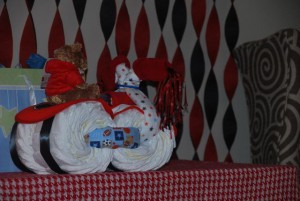 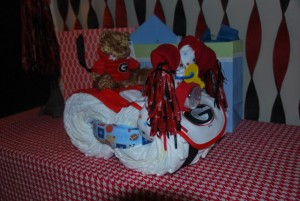 A four wheeler made from diapers 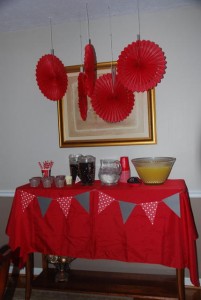 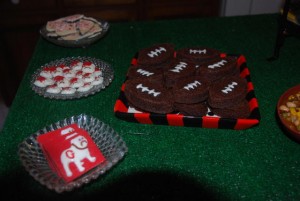 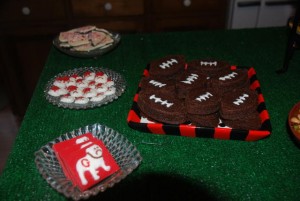 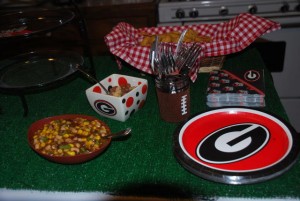 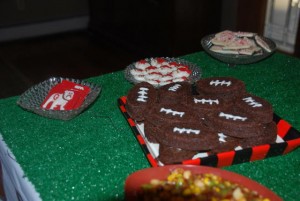 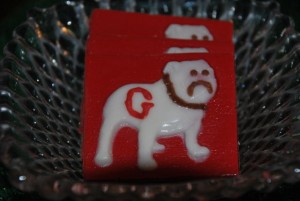 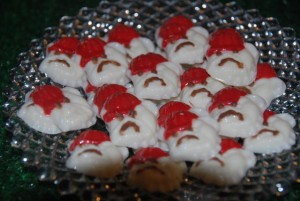 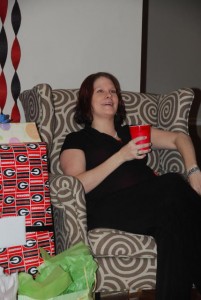 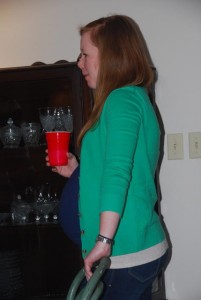 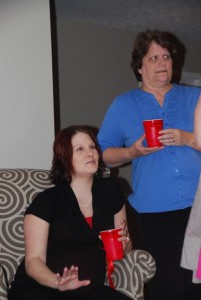 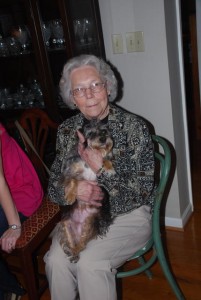 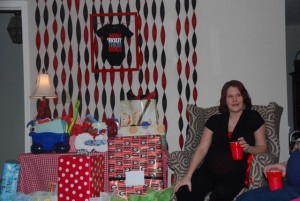 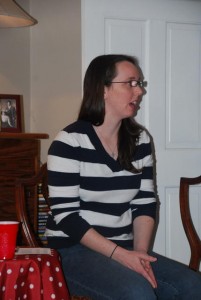 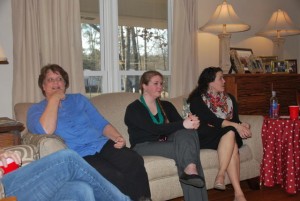 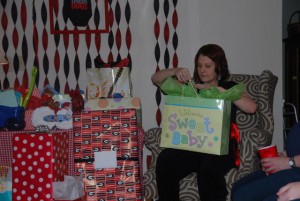 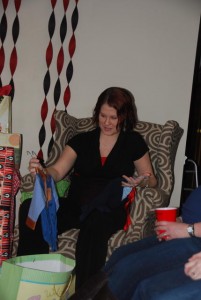 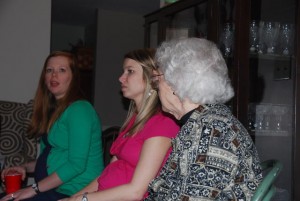 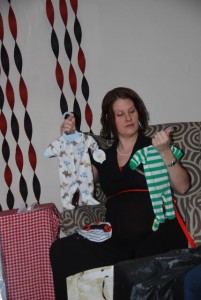 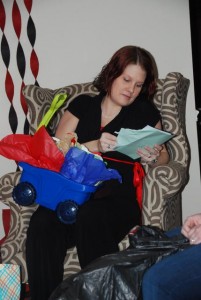 Well, knee number two is installed and doing quite well.

I thought an odyssey of the journey to this point might put this in perspective.

About 10 years ago, I had an explosion in my right knee.  As I look back on it, I think I brought on the final demise of the already achy, creaking, popping knee when I decided to show those young whippersnappers at recess how to jump rope, running in and out.  Once I got in, I jumped (on pavement no less) 150 jumps.  The kids could’t believe an old lady like me could still jump rope, and my competitiveness wouldn’t let some 10 year old out do me.  No sirree!!!

That afternoon, as I was walking across the back yard, I fell to the ground when my knee felt like it had exploded.  After a trip to the ER and an xray, I made an appointment with an orthopedic doctor.  He looked at the xray and told me he didn’t see any problem.  After a three month period, I still had extreme swelling in my knee, pain so bad I couldn’t rest my foot on the floor, and the knee cap was locking up when it got caught on the lower leg bone. That’s when the doctor said he didn’t think there was anything wrong with my knee, and point blank told me he thought I was faking it.  I left his office in a daze, and never went back to anyone about the knee for the next 6 years.  By then I had to use a cane to get to and from my classroom every day (too prideful to use it during the school day, so I just have to grit my teeth and bear it).   After a summer of being in a wheelchair, I decided that I just couldn’t work anymore with the pain and agony of just getting into the car.  ( I often called Scott when i pulled into the carport to ask him to come help me out of the car.  I couldn’t bend my leg enough to get it over the car’s threshold.)  I told my principal that I was retiring.  That was the fall of 2004.  I retired in June of 2005.

I spent the first five years of my retirement limping my way along.  Thank heavens for the United Health Care program that assigned a nurse to contact retired teachers to get input on our health issues.  She asked about chronic pain and I mentioned my lower back and knee problems.  She suggested that I have the back checked out and recommended a doctor in Newnan.  After and MRI, Dr. Kessler determined that my back was not causing the knee pain and he referred me to Dr. McMath.  On my first visit, I had an xray and Dr. McMath said I didn’t have any cartilage or fluid left in either knee.  I was basically walking with my bones rubbing against each other.  He tried a couple of stop-gap measures, but neither worked so my only alternatives were grin and bear it or surgery.  I chose to have me knee replaced in 2010, almost 10 years after my trip to the ER.

I had a six hour knee replacement surgery on Wed, that included removing bone fragments from the flesh in  the back of my knee, caused when the knee cap got got on the leg bone and crumbled.  This was probably the sorest place I had.  When I woke up I told Scott that for the first time in over 10 years I was pain free (except of course for the incision and muscles, tissue pain.  But absolutely no joint pain)  I went home on Saturday.  They started the physical therapy the day after the surgery and I was up and walking down the hall by myself by Friday.  When I came home, I had in home therapy for three weeks, then a few weeks at Southern Therapy.   And, yes the therapy is painful, but you get out what you put in, so I really put my whole heart into those hated exercises.  I was walking with a cane by the end of the second week after surgery, and totally unassisted by week three.  And then the night throbs started.  In the middle of the night, I woke up with the most excruciating pain in my knee, and wondered why in the world I ever thought this was a good idea.  A few days of this really nagging pain, and I was back on the road to full knee health.)

I finally gave in to the terrible pain (mostly because it was interfering with my everyday activities and scheduled my second knee surgery.  I have tried to work it around the time when Dianne will have her surgery so that I will be up and able to help her after her surgery.

The surgery this time was much shorter, and I was able to be up walking by Thursday, even getting myself a bath and putting on my own pajamas that afternoon.  (I think someone was paid a whole lot of money to design a hospital gown that would make patients look like a laughingstock, and couldn’t wait to get out of mine.)  By Friday, I included a trip up and down some stairs to show the therapist that I could get into my house, then I was good to go home. Sat. day 4- The trip home was a nightmare of pain, not from the knee, but from the pinched nerve in my hip.  Once home, I took some pain meds and spent most of the day in bed.

Sunday, day 5-  Made a few steps unassisted by cane or walker, did my exercises, then was totally useless the rest of the day.

Mon. day 6 started in home therapy, but didn’t get to have another session until Fri. due to snow storm.  But I know that most of the work is done on my own, so I kept up with the exercises as much as the hip pain would allow.

Fri. Day 10-  We took our first trip out of the house for dinner Friday night.  The trip was fine, but my hip and knee were begging to come home before we finished our meal.

By Sat. (Day 11), I was up and moving about really well.  Dianne came by and spent the day with me, brought me lunch and we had a great day together. I had a short visit from Joan Bush, who graciously made UGA bulldog mints for our tailgate party themed shower.  Leslie came late in the afternoon to start decorating for the baby shower on Sunday.

Sunday 12, Leslie, Kristi and I hosted a baby shower with 20 guests.  I made it through the day walking on my own, with no walker or cane.  It made me a little sore, so I went back to my walker today.   Jimmy and Sue came by to visit for a while.  Time goes by much faster when there’s someone else around to keep me occupied.

Day 13 I went back to Dr. McMath today to have the staples removed.  He was very pleased with my progress in bending my knee and cut my home therapy down to two weeks and said I’d probably only need about 4 weeks of out patient therapy.  I told him that if I had had him around the throat last Thursday I would have gladly strangled him for getting me into this mess.  He thought that was hilarious.  His patients usually curse him after surgery when they start therapy, but he doesn’t usually hear it directly his patients.  After a quick trip to the fabric store, lunch out, we’re home for the day.   Therapy starts again tomorrow.I thin

I am so glad to have this behind me, and believe that it will improve the quality of my life to be pain free after struggling with this for almost a decade. I told Dr. McMath that I missed the first plant dig of the year and hoped I’d be able to get out there at least by mid March.  He predicted that I’d be back out there by the first of March.  As the old saying goes “Doctor knows best”, so expect posts soon of me and my plant buddies digging in the dirt together again.

I’ve heard that old saying that into each life a little rain must fall.  This was a downpour for me, but compared to what some people suffer, I think I came out on the winning side.  I appreciate all the prayers, calls, cards, and words of encouragement and hope that this will help others decide to take the plunge to take control of their health issues and make them work to your own best advantage.  I’m sure that my life will be even better once the recovery is complete.

Scott wanted a day out to go to a card show, but wasn’t comfortable leaving me here by myself.  He suggested I go down and spend the day with Mama.  But that would entail taking the leg exercising machine, my meds, my heating pad, my walker, blah, blah, blah.  So the solution was for Dianne to spend the afternoon with me after she got her transfusion this morning.  She brought me Chinese for lunch and we had a good long visit, no tv, no phones, just girl talk.  We did a complete virtual remodel of her house, talked some about our plans for our first trip post surgery, and did what sisters do-enjoyed each other’s company.

Also had a nice visit and surprise gift from my dear friend Joan Bush.  She’s always so thoughtful and helpful.  I don’t realize how much I miss old friends until I see them again.  Hope we’ll be able to have another visit together soon.

Now it’s time to get back into the torture machine and stretch that knee, then do my round of exercises, then sit around and moan cause I’m stiff and sore.  But I have been able to take some steps without the walker today, made up the beds, and managed to do some laundry, so things are getting better everyday.

I am blessed to have such a caring family, Scott the babysitter, housekeeper, tote and fetch guy and Dianne who knows how to just be when I need her.

Now awaiting an overnight visit from Leslie as we get ready for baby shower number two tomorrow with a Georgia Bulldog/tail gate party theme.  Looks like it’s going to be really cute.  Shower number three will be in Feb., then we’ll have a break until the next baby boom in the family.