The week started off with church on Sunday morning, with a visiting preacher.  I really enjoyed his sermons for the past two weeks.    After church, we went to the Braves game with some folks from First Presbyterian.  The Braves won, but it took one good inning to win it, with eight innings of their usual lackluster hitting.

After the game, we had a pleasant ride home, with a beautiful sunset to lead us back to Carrollton. 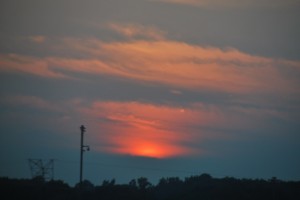 On Monday, we took Scott’s mom to a doctor’s appointment.  She had a spill in April and her hip has been hurting recently.  Luckily, the doctor said it was just some inflammation and could be cleared up with some anti inflammatory meds.  I’ll take bets that no one has a mother in law as great as mine!

Tuesday was a much anticipated day for those of us who are working on the Buffalo Creek Nature Trail.  My good friend, Ernest Koone of Pine Mountain joined us  for a hike down the trail.  Ernest is a foremost authority on native azaleas.  He can recognize them planted in the woods, with no blooms.  He is amazing.  He was helping us decide what kind of azaleas will work well on the trail, along with advice for placement and numbers.  This spring, all our hard work should pay off with some beautiful blooms!  If you want native azaleas, you should visit Ernest at this plant place, Garden Delights right on the main drag in Pine Mountain. 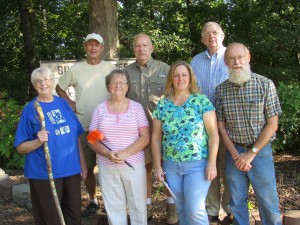 This is one of the hardest working bunch of people I’ve ever had the privilege of knowing. 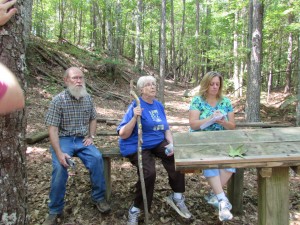 Taking a break and taking notes.  I think Kim wrote down every word Ernest said!

On Wednesday, Scott and I continued working on putting a protective coat of paint on the deck.  I’m not crazy about the painted look, but Scott really wanted this, so I gave in.  Maybe it will grow on me.

I spent quite a bit of time hauling mulch from the composted shreds that the Carroll EMC folks kindly dumped in my front yard last year.  It is like black gold.  All my plants are gonna be loving them some EMC workers.

The Boy Scouts gave us a hand on the trail planting ferns and a few other native blooming plants.  They have adopted the area we are referring to as the Fern Glen.  If you walk the trail at Buffalo Creek, you’ll come up on it after you cross the meadow.  They installed about 25 plants.  It will take a while, but it’s going to be spectacular.  Farther along on the trail is a wide expanse of ferns that was planted several years ago.  If you’ve never seen our native big leaf magnolia, there are two planted there.  You’ll be amazed at the size of those leaves, even though the plant is not fully grown yet. 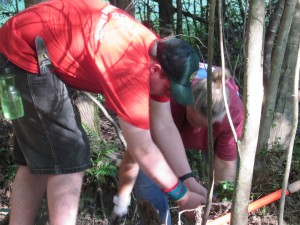 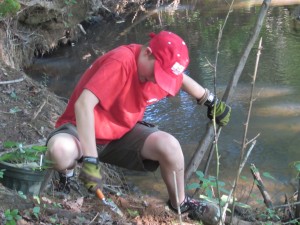 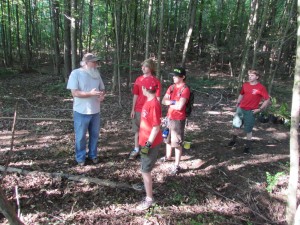 I’ve had a great time watching the hummers do their acrobatics in the air as they come to the feeders.  I think they spend more time trying to keep each other off the feeders than they actually spend eating.  One of the hummers alighted on a trellis in the vegetable garden on Monday while I had my sprinkler going.  He sat there when the water passed over him, then waited for it to return.  After the second pass, he would fly up about a foot and flaps his wings, then settle down for another shower.  He spent about 15 minutes in the ‘rain’. 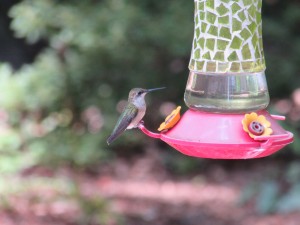 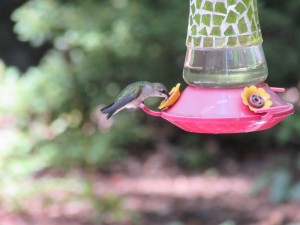 Hummingbirds absolutely adore Lobelia.  Today the red cardinal flower starting opening its blooms.  The blue and white have been open for a couple of days.  My hummers are very patriotic, with their red, white and blue flowers. 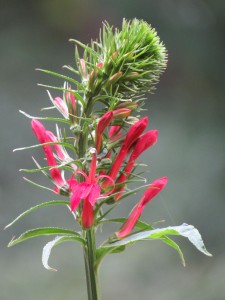 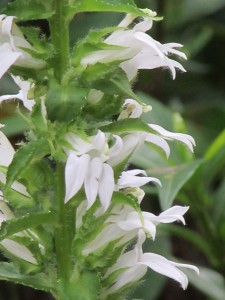 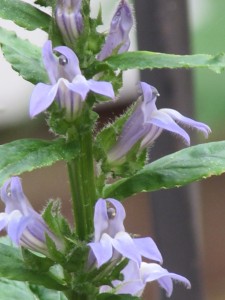 Today was another day of painting and mulching.  But tonight, I’ve been busy. Made quiche to slice and freeze for a quick heat up breakfast, made some black and blue berry jelly (didn’t have enough of either kind of berry, so I just combined them) and finished up a batch of Mama’s really, really sweet pickles.  The pickles are good, but the cole slaw and chicken salad with these pickles are out of this world.

Life doesn’t slow down and wait, so I have to keep on the run.  Next on the menu:  shopping for native plants for the nature trail, scouting new digging locations for native plant rescues this fall, and finishing up with the sidewalk we’ve been putting in for Dianne.  (As well as planting those shrubs and flowers that we’ve been babying in our back yard until we could get around to putting them in the ground at her house.)  One of these days, I gonnna sit in the porch swing and do nothing!