The past two weeks have been pretty busy around here.

Last Saturday, Scott, Dianne and I went to Leslie’s house with a truck load of flowers I had propagated, divided, or dug up on rescues.  We started with Scott cutting away a ton of small trees along the side of the driveway.  Don’t think the previous owner had taken care of this area of the yard for years.

After he got a number of trees cut, we hauled them to the wooded area to start a brush pile for animals to use.  We started planting, and I think we planted for about 4 hours.  We are doing drifts of shade loving plants, with hellebores, ferns, fly poison and hostas in a group.  We have native tiarellas cascading down the hill, meeting up with the hostas.  In another area, I put in some really nice native maidenhair fern that will dangle daintily over a large rock.  At the base of the rock I put in five small leaf hostas.  It should make a good showing next spring.  I put in two or three other groupings of hostas, and will go back and add additional hellebores and ferns along the hillside.  Leslie spent some time this week cutting back the overgrowth beyond what her daddy did on Saturday, so it will be ready for planting as soon as we can get back up there.

Here at home, we pressure washed the deck and are now putting a new coat of finish on it.  I’m not too crazy about it, but it will give good protection.  Maybe I’ll learn to love it!

I’m about to order outdoor fabric to make new covers for all the deck/patio furniture.  That should be ready to start within the next two weeks.

The vegetable garden is coming along, with mainly cucumbers so far.  I have my first batch of pickles in the jar.  I did dig up about 15 pounds of russet and Yukon Gold (my favorite) potatoes from the garden this weekend.  They are soooo good when they come straight out of the garden!

Last week we went to the peach farm in Musella, GA and got 16 boxes of peaches for us and family/friends.  We dried most of our peaches for fried pies, but also put some in the freezer.  I might get some more to make some jam, chutney and pepper relish.   Of course, I ate a ton of them as I peeled, and they were so juicy and sweet!  My mouth just waters thinking about them.

I put squash, zucchini, and okra in the freezer last week and hope to have some more of same in the upcoming week.  Don’t know why I put up so much squash, since Scott doesn’t touch it.  But I do love fried squash, squash pickles and squash casserole.  So I guess I’m spoiling myself!

Leslie and Bradley spent the day with us yesterday, helping set up our new computers.  We are totally clueless when it comes to technology stuff, and Bradley is like the King of Technological Stuff.  I told Leslie she can’t ever consider getting rid of Bradley, because her daddy and I would have too hard a time deciding which of them we should keep.  Bradley can actually log into our computers from his house and fix the stuff we mess up.  How cool is that?

i’ve started pulling plants out of one of the gardens, because it has just never been very pretty.  Mainly I’ve dug out some iris.  I plan to compost them, unless someone would like to have them.  I think they are the kind with the purple ‘falls’ and the golden brown upright centers, but I am not sure.  Let me know if you want some of these.

I have also got quite a bit of annual Silky Gold butterfly weed that I grew from seeds.  I have it in several places in the garden  and have already given away a number of them.  They need to be in the ground soon, so they can bloom and make seeds before frost.  They are great for attracting butterflies and other pollinators.  Free for the asking, just let me know.

This coming week I have a scouting trip planned to discover what new and exciting plants we can dig at one of our rescue sites.  Also have a trip to West Point planned to collect seeds for the beautiful native shoal lilies from Shoal Creek, thanks to a friend in the Georgia Botanical Society. 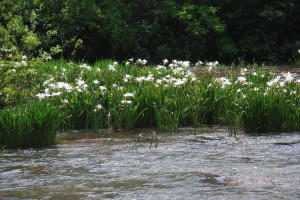 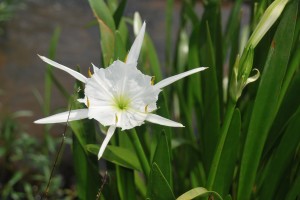 Then I will help on Saturday with the Boy Scouts who are planting ferns in a large area along Buffalo Creek at the Buffalo Creek nature trail.  For once, we GNPS members will be telling others to dig instead of doing the digging!

If you haven’t walked the Buffalo Creek Trail at the Ag Center, you are missing one of the neatest walking trails in our area.  The West GA Chapter of the Georgia Native Plant Society has taken on this trail as our ongoing project.  We have spent the last few years cleaning a portion of the trial of its invasive honeysuckle, privet, poison ivy and planting rescued plants. We have just finished putting in some educational signs along the first portion of the trail.  We are working on a long range plan to revitalize the entire trail.  We are putting in a fern glen along the creek bank, and plan to add a number of native azaleas  along the trail.  This will be in addition to the Azalea Walk we have already been planting.  Our goal is t o have native azaleas blooming almost continuously from March/April until late fall.

Thanks to a grant from the Community Foundation of West Georgia have had a landscape designer helping with the planning, and will have access to funds for purchasing many native trees, shrubs and flowers to enhance the trail.  It will eventually connect to the green belt that is currently being built around the city. I think the two together will be a great attraction for visitors as well as residents of Carroll County.

Now I’ve finished my commercial for the GNPS, so I guess I’ll give it a rest.

As you can see, I’m not letting any moss grow under my feet just because I’ve retired.  Life gets getter all the time, especially when you have two new knees!